I used to think I used a coaching style with the teams I led.  Then I went on a coaching course to learn a little bit more.  Imagine how disappointed I was when I found out that I hadn’t been coaching at all!  It turned out that all I had been doing was being vaguely encouraging while I told them what to do 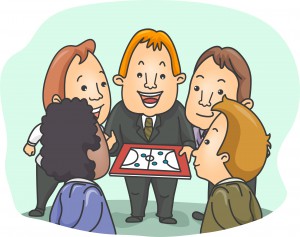 and how do it.   And I was so busy because I always needed to know everything they were doing, so I would always know what to tell them to do.

I discovered that getting people to do things my way, no matter how nice I was while I was doing it, was nothing like coaching.  What I was doing was creating an environment where my team were expecting me to do the thinking for them.  This, in turn, led to two problems.  Firstly, it meant that what my team was capable of was limited to what I could think of and what I could get around to.  Secondly it meant that all their potential was bottled up, unused, or dripped out when I could find the time to tap it.  What a waste.  All that time I could have been using coaching to empower and inspire them.

So what is coaching then?

I found that coaching is when we help people work things out for themselves rather than telling them what to do.  Rather than judging and criticising, we take the position that our people have strengths and passions, which we help them to bring out.  We focus on goals and what needs to happen in order to achieve them.  We focus on what’s happening right now, and the options they have available to them.  We help them find the answers that are just beyond their reach, that they might struggle to find on their own.  We help them find actions they will commit to taking, and we follow up with them on the commitments that they make, to help them be accountable for their promises.

To take a coaching leadership style takes courage.  To let go of control. To trust in them and take the chance that they might fail, if only this time. To have the patience to help them understand what has happened when things haven’t worked out so that next time they will be more successful.

The challenge here is that our success is tied up with their success.  It is natural, particularly when we are under pressure, to want to take control so we can maximise our chances of success.  But when we do that, we shield them from the light of experience that would let them grow, if only we could only get ourselves out of the way.  When they don’t grow, then ultimately the potential for success from the teams is stunted.  And they might just go and find a job where they do get to think for themselves.

What skills do I need to use?

The skills needed are deceptively simple, but to do them well requires focus, practice and patience.  Rather than doing the telling, we focus on the asking.  I know it sounds obvious, but if someone is answering the questions we have asked, we actually need to listen to them.  All too often we are focussing on what we can say next and what we would do, rather than really taking in what people are saying to us and how we can help them.  To focus our minds on this, and to help them at the same time, we can play back what we have heard, clarifying our understanding.  We can also reflect back to them any trends or observations that stand out to us that might not be so apparent to them.

Here is an example;

You asking: “What goal would you like to focus on in the 20 minutes we have together today?”

Them answering: “Well, I am not sure really, on the one hand I need to get our supplier to ship on time and they are not responding to me.  On the other hand if I don’t get this software tested then our customer is going to be really annoyed.”

You clarifying: “So what you’re saying is that we can focus on the supplier, or the testing or the customer – is that right?”

Them answering: “I don’t know!  It all seems to be happening at once and they are all giving me a hard time!”

You reflecting: “It seems like there is pressure coming from lots of directions at once.”

Them answering: “It’s true!  If only I could get the customer to give me a bit more time, it would take the pressure off the other things.  I wonder if they really need the software next week – Fred said he was going on holiday.  Maybe I will give him a ring.”

In this example, you didn’t have to tell them what to do.  In fact, if you were doing the driving, you might have focussed on the supplier issue.  That might or might not have been better, but the chances are, you would have been drawn into fixing it.  This way, your team member has worked out a way of solving the problem, they are taking responsibility for sorting it out, and you know what is going on.  If it doesn’t work, then you can help them work out another way of fixing it.

What steps can I take?

Well, I think the best coaching tool is from what I think is the bible of coaching – John Whitmore’s “Coaching for Performance[1]”.  It’s the GROW model – focussing on Goals, Reality, Options and what they Will do.

Goals.  Firstly we establish a realistic goal for the discussion, and the time available.  No point in picking a really complex topic if you have 20 minutes.  Better to focus in on a particular challenge and how it can be addressed.  For example, it could be “I would like to work out how to persuade our supplier to be responsive.”

Reality.  Next we need to hold back from the temptation to jump to solutions too quickly.  Instead, we establish what the current situation is.  For example, what is happening with the supplier, what are their challenges?  What have we tried so far?  Are there tensions, issues with trust?  Exploring the reality can wake us up to the range of options available.

Options.  Now we move onto those options.  Exploring multiple options, considering the implications and how they can be carried out.  The person being coached works out for themselves what they can do and who can help them.  We might be able to see potential flaws or gaps, and we can dig deeper into these, allowing our people to come up with ways of addressing them.  Then we can move on to taking action…

Will.  This is about what they will do next, the specific steps or actions.  The trick here is to get a commitment from them – what will they do, when will they do it by.  And the killer question – “On a range of 1 to 10, what is the likelihood of you doing it?”  If the answer isn’t a 9 or 10, then there is more work to do.  Find out what is getting in the way, what needs to happen in order for it to become more certain.

Then the key is to hold them accountable.  Agree a time to check in or to feed back.  When the time comes, help them explore what went well or what went wrong, so that they can reflect and learn for the next time.

When can I use it?

This kind of technique can be used in lots of situations – it can be part of a regular review with team members, or when dealing with a specific challenge or opportunity.  It can be done one to one, or it can be done with a whole team.   Once you have a bit of practice with this, it will come naturally to you.

What I have found is that people blossom when they get to work things out for themselves.  Sometimes they need specific guidance for sure, and we need to be ready for that – the key is to step out of the telling mode as quickly as possible, and to let them drive.  Who knows what great places they will bring you to if you let them take the wheel?

A year after I did that coaching course, I found myself with responsibility on a new team that had been through a traumatic time and were under serious pressure.  In my first meetings with each of them, I found myself doing lots of asking and listening – this took far longer than I would have allowed for previously, but it was well worth it.  In return they gave me respect, loyalty and did a fantastic job in driving their projects forward.  For the first time in my career, people were saying “Jean is a great listener”!  And, I got to lead a team without running around like a mad woman trying to spin every one of my people’s plates.  From command and control to empower and inspire.

Posted on June 25, 2015 by admin. This entry was posted in coaching, leadership, tools. Bookmark the permalink.